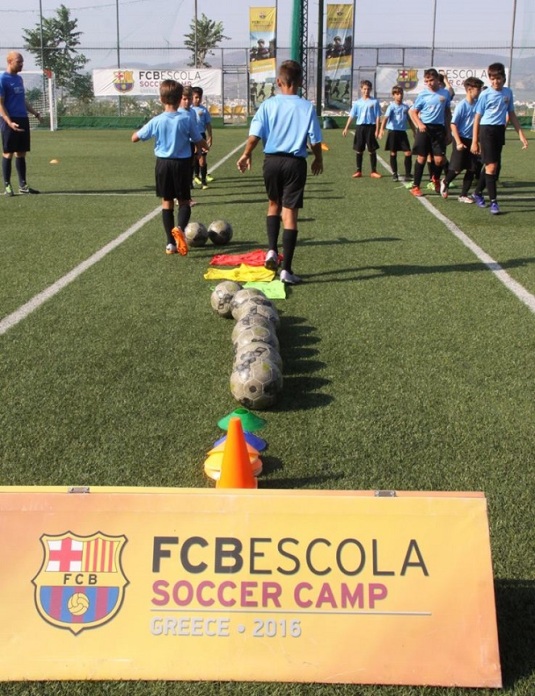 The young football players that participated in the specific camp were able to experience the training sessions, which their idols, in FC Barcelona execute on a weekly basis.

The program of the camp was not an easy one at all. The morning training started around 08:30 a.m., then the players watched videos from the various training units, the tactics were explained to them, and then the evening training session started at 17:00.

In other words, the youngsters spend roughly 7 – 8 hours each day, in the facilities of Volos Football Land, training not-stop. An admirable feat indeed, considering the fact that the youngest player, participating in the camp, was 6 years old; nonetheless, all players endured.

Bottom line is: all children, coaches and the managerial stuff from the FC Barcelona Escola Camp had an exciting experience.

If you want to learn more about the FC Barcelona Escola: Click Here

If you want to know more  -> download the free mobile / tablet application from:

Barcelona produce more first-team footballers across Europe’s elite ‘Big 5′ divisions than any other club in the world, according to new analysis by the CIES Football Observatory and published today by Sportingintelligence.

The next best producers of talent for the ‘Big 5′ are Lyon of France and Real Madrid of Spain (31 players each), followed by Rennes of France (28), and Arsenal and Manchester United of the Premier League (27 and 25 respectively). No other clubs have been responsible for as many as 25, with Bayern Munich next on 23. An extended list is in the first graphic below.

The CIES study analyses the squads at 472 clubs across Europe’s 31 major leagues across metrics as varied as nationality, training background, migratory patterns, international experience, age, height, duration of stay at each club and more. There is also a country-by-country analysis of the 31 leagues as well as a section that identifies 25 of most promising young players in each top division.

This piece only touches upon one small part of the report, namely the production of players and identifying which clubs are doing the best job at raising talent. It also expands on that. If you are interested in other sections of the report or more background details on the content of this article, visit the CIES website or contact them via the links at the bottom.

The definition of ‘produced’ for these purposes means a player spent three or more seasons within the development programme of the club in question specifically between the ages of 15 and 21, which are considered a footballer’s most important ‘formative’ years.

Of the 44 Barcelona-produced players at clubs in the ‘Big 5′ divisions, 16 of them are still with Barcelona and 28 at other clubs. We will name them all in a moment, but first a graphic that shows the best 22 producers of ‘Big 5′ talent.

To provide two examples in detail of clubs good at rearing players (not always of that club’s nationality, but developing them nonetheless), we’ll use Barcelona in Spain and Arsenal in England as the most prolific clubs now from those two countries.

These examples also show how, in relatively rare cases, a player can have two ‘producing clubs’ who each spent three years nurturing him before the age of 21. In this case, both Barca and Arsenal helped to ‘produce’ Cesc Fabregas.

Barca’s 44 players break down into 16 still registered with them, and 28 others.

Arsenal’s 27 players break down into 10 still registered with them and 17 others.

As the first graphic shows, most of the best producers for the ‘Big 5′ leagues are clubs within those five divisions. The only exception in that graphic is Le Havre of France’s second tier.

Next we’ll look at the clubs outside the ‘Big 5′ who produce the most players for that elite group. It is a self-explanatory list, topped by Le Havre (20 players) and with two Argentine clubs, River Plate (16 players) and Boca Juniors (15) next.

Ajax of Netherlands are famously big producers of talent, as well as producers of brilliant talent. They appear at No5 on this list, having produced 13 players currently at work with teams in the ‘Big 5′ leagues. We’ll return to Ajax later, because they actually produce more players working across Europe as a whole (31 major top divisions) than any other club.

So acute is Lionel Messi’s vision on the football pitch that he seems to have eyes in the back of his head, but is there a scientific explanation for his sixth sense, asks Champions?

Watching Lionel Messi dribbling through a defence or playing a slide-rule pass through a narrow space at an acute angle is one of the most thrilling sights in football. It is almost as if he has a bigger picture of the game than anyone around him. Eyes in the back of his head, if you will.

Now academics in Germany and the Netherlands have decided to put this theory to the scientific test. “We were interested in the underlying mechanisms of expert performance in sport,” explains Professor Norbert Hagemann from the University of Kassel. “Footballers are active on a huge field and have to attend to, or view, so many people on the field that we believed the best player could attend to more players at the same time.”

In layman’s terms, the researchers believed the best players had a broader visual span that enables them to see more of the pitch and the position of their opponents and team-mates at any one time than less skilful players. To test this belief, they studied the behaviour of amateur footballers when they were shown various football situations. However, the results actually contradicted the theory.

“In general, we were not able to find a broader visual span in skilled players,” says Hagemann. “They do not extract information from a broader visual area. However, we found a longer fixed duration. Such skill-related differences in ‘gaze strategies’ are thought to be functional in terms of more efficient information pick-up.”

So while the best players may not have a greater field of vision than average players, they pick up more information from a single glance. This finding supports the ‘chunk theory’, based on the discovery that the best chess players could remember a board, not in terms of 32 pieces, but as five or six groups of pieces.

Daniel Kahneman, the Nobel Prize-winning psychologist, has his own take on this phenomenon. Drawing on the experience of firefighters who can sense when a burning house is about to explode, he suggests they develop something he calls ‘expert intuition’, an instinctive method of solving a particular problem. Could this describe Messi’s innate ability to make the right run or play the right pass?

Players who are not as gifted as Messi could be trained to improve their ‘fixation duration’, but Hagemann is not convinced this will directly improve their performance: “The less skilled player has to learn the structure of play, the patterns of the movements and so on. They have to build a knowledge base that helps them discover the relevant information in the current situation. To train less skilled players, it would be more helpful to orient their attention to the relevant features of play. Fixation duration is a by-product of knowing where to attend.”

Whether you refer to this as a knowledge base or expert intuition, this quality helps more skilful footballers predict upcoming events much more precisely – the greater the knowledge base, typically the better the player.

“If the best footballer already knows what is going to happen then they will know where to direct their attention,” says Hagemann. “Players like Messi are great at decision-making. They have anticipation abilities that help them solve complex problems in the best possible way.”

Now the team are aiming to get to the bottom of the underlying mechanism that allows Messi to solve these complex tasks with such consummate ease. The defenders’ union will be waiting with bated breath to read their findings.